If one could tell the sanity of a man by his looks, perhaps Melville Davis would have spent his days in the Wyoming State Mental Hospital in Evanston.  But the 1913 headline in The Rawlins Republican partially read “Davis sane” for the savage murder of his sister Mrs. Annie Rider at Fort Steele, Wyoming the fall before.   Despite the testimony of doctors, family, and friends affirming various descriptions of Melville ‘being peculiar’ throughout his life, he would be serving time in prison.

I’d rather be lucky than good.  Perhaps all the luck had been used up when it came to the Davis family, and certainly by the time Melville appeared.  He was born in Hanna, Wyoming to a Welsh immigrant mining family, who pulled up stakes in Wyoming in the mid 1890’s to switch from mining coal to mining gold around the Cripple Creek, Colorado area.  Annie was the oldest daughter of that Welsh family; she stayed behind with the family she and Frank Rider had begun.

Frank and Annie settled near Fort Steele with their 6 children when Melville, 15 years younger than his 35 year old sister unexpectedly walked up the road.  Melville had been showing escalating bizarre behavior, with it culminating a few days before his Fort Steele appearance in him setting his boarding house room ablaze in Superior, Wyoming.  In the very near future, Annie would be dead.

From newspaper accounts, with Frank at work as a bridge tender for the Union Pacific, 20 year old Melville had tried to kiss his 13 year old niece after being warned by Annie to leave her alone.  When the girl broke away on his second attempt and told her mother, Annie severely scolded Melville.  Melville ran to a bedroom to retrieve a gun, pointed it at Annie and her daughter, and pulled the trigger.  The gun misfired!  Annie yelled at her daughter to run, shortly followed by Annie and Melville.  The girl looked back to see Melville strike Annie with what she thought was a board.  It was not; it was an ax and Annie was almost decapitated.

The following day, a letter arrived addressed to Annie from her father warning her of Melville’s recent actions of setting the fire and cautioned her to be alert for trouble.  The late arrival is a prime example of bad timing, sad luck, and a sorry testament to the reality of the speed of communication at the time.  A manhunt began to find the missing Melville, and he was found near a Fort Steele location where another fleeing fugitive, Frank Wigfall had been discovered just the month before.

Melville was sentenced to life in prison for second degree murder.  His mundane existence was dotted with depression and the occasional threat of suicide for the next 25 years.  On September 28, 1938, the official report read of his removal.  “Melville Davis committed suicide by jumping off the 1st gallery onto the cement floor, striking his head, which caused his death.”  Melville Davis, prisoner number 1935 was no more.

Across from the Old Penitentiary to the east lies the Rawlins Cemetery, the walls and towers ever watching as witness and sentry.  Melville is interred in this cold place, joining his brother-in-law Frank Rider who died earlier that year in 1938.  And of course, the same cemetery where Annie lies, the subject of many shed tears and whose passing changed lives of her many children and family.

Information from The Rawlins Republican, and Wyoming State Archives 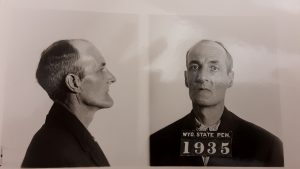