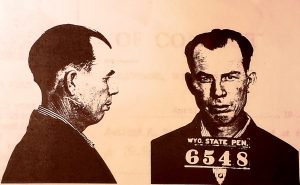 Delford Edwards in 1947, at the age of 35 years old, was arrested in Natrona County for Grand Larceny and given a 5 to 7 year sentence. Originally a ranch hand from Oklahoma, Delford got himself in trouble for stealing a car that belonged to his ranch foreman in Casper. On April 12, 1948, Delford was apprehended for his crime and taken to the Wyoming State Penitentiary.

Being divorced from his wife, Delford had no choice but to write home to his mother and family in Oklahoma. Delford Edwards was sentenced to 5 to 7 years in prison. Once Mrs. Allie Edwards had received the older brother’s letter, she made it Delford’s younger brother Earl’s mission to see if there was any way the family could help, but events lead the two brothers to a much worse, and crazy situation. 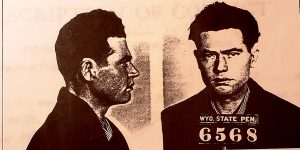 26 year old Earl Edwards, younger brother of the car stealing Delford, was sentenced on May 28, 1948 for sneaking drugs into the State Penitentiary.

While visiting Delford at the prison, he discovered his troubled brother was sick. So on May 15, 1948, Earl took it upon himself to assist Delford’s illness. He was arrested that day on the charge of attempting to sneak dope into the Wyoming State Prison. Earl had attempted to help his brother Delford by smuggling a “Vick’s Nasal Inhaler” inside a jar of peanut butter.

At the time, prison authorities believed Vick’s Inhalers were known to cause a state of delirium, which made it unsafe to have in a penitentiary.

When Allie Edwards came to visit her two boys, she was informed of the smuggling attempt and was reassured that the two partners in crime were sharing a cell together, but the Pen would not allow the boys to receive visitors.

Earl was released on May 22, 1949, and later his brother Delford on January 11, 1951. Both brothers were on good behavior, and each was released earlier than their sentences suggested.